In an effort to put this Akdy 32 BTL Electric Wine Cooler review together, we weren’t too satisfied with the pre-purchase information available about this wine cooler. For some or other reason it appears as if the manufacturers of this cooler are good at one thing and one thing only, manufacturing a solid wine cooler. The same can’t be said about their advertising and marketing skills however because we truly believe more wine enthusiasts would be more confident in purchasing what is one of the best wine coolers we’ve had the pleasure of testing, if more pre-purchase information was made available. 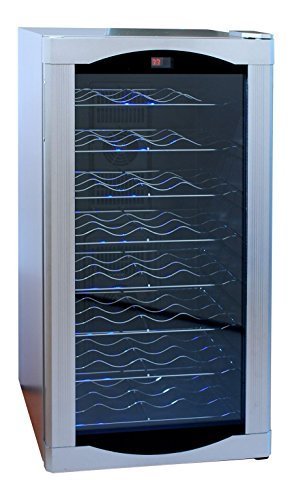 This wine cooler perhaps has a little bit of a commercial look and feel to it, but that’s probably because of its colossal 32-bottle capacity. Switch on the blue interior light and it looks a little less “commercial” though, which is indeed just for visual appeal (doesn’t really light up the bottle labels, which aren’t really visible when packed in anyway). It looks “polished” and refined enough for any ultra-modern or contemporary interior décor styling, with its silver-grey (chrome) casing finished off with an inconspicuous but very attractive-looking recessed handle. Tempered glass covers the cooler’s door, offering a full view of your bottles which are best inserted with the mouths facing outwards.

This cooler’s temperature is easily monitored and controlled via the LED display and electronic touchpad control unit. It comes with a convenient one year warranty to give you some post-purchase peace of mind and it has a power rating of 115Volts @ 60Hz. This is a pretty impressive power rating for a unit which is non-thermoelectric cooled.

You’ll get very efficient cooling for a sizable variety of your wine collection, kept within their optimal temperature range in a single zone cooling compartment. If you’ve had the privilege of owning other wine coolers from other manufacturers, the basic features of this particular cooler will stand out as added bonuses, especially when taking into account its price.

It perhaps wouldn’t be enough to proclaim our surprise at this being such a silent cooler for a unit which houses 32 bottles of wine. This is a silent wine cooler, period, not just silent for one of its large capacity and subsequently large size. Its silent operation is even more astonishing since this isn’t a thermoelectric cooler.

As far as wine storage goes, you can pretty much store and chill all varieties of your favorite red or white wines depending on the temperature at which you set it. The lowest setting it can reach is 46 degrees Fahrenheit, which means some of your most delicate whites can also be stored at their optimal temperatures (if you’re only storing white and sparkling wines). Otherwise, a setting of around 55-56 F would be borderline optimal for both reds and whites. To say this cooler’s ability to maintain a constant internal temperature is dependent on the ambient room temperature would be harsh because it only really fluctuates within 2-3 degrees of the room temperature, maximum.

There are so many things to love about this cooler and very little to complain about. Wine enthusiasts who have previously owned other wine coolers in the past will notice functionality features such as no formation of condensation, which is why it doesn’t have a draining hole.

After the cooler settles in one spot following its shipping process, it takes one or two days to really get going in terms of responding to your preferred temperature settings. After that it works like a timeless mathematical formula, keeping the bottles chilled to perfection.

If your ultra-modern, new-age interiors feature counters which are as big as 33” tall, this will make for the perfect under-counter wine cooler, but some clearing space of around 3-4”all around is a must for proper ventilation.

Prior to putting this Akdy 32 BTL Electric Wine Cooler review together, we naturally tried to find as much information about it as possible before we could give it a try ourselves. This proved to be quite a difficult task and we essentially put it through its paces without much pre-purchase information. Our final verdict points to a curious case of the manufacturers not being very good at marketing their product, but they definitely seem to be extremely competent in the actual process of producing a top-class wine cooler. That’s exactly what it is, a top-class wine cooler with dead-accurate temperature control. For the wine collector seeking reliable performance, it works like an old recipe passed down from generation to generation. A lot more noise should be made about this wine cooler as it seems like quite a pity that so few wine enthusiasts know about it.

Wine Cooler Lab Copyright © 2020.
© 2015-2016 Wine Cooler Lab. All Rights Reserved. winecoolerlab.com is a participant in the Amazon Services LLC Associates Program, an affiliate advertising program designed to provide a means for sites to earn advertising fees by advertising and linking to amazon.com.